Donald TeelDonald Teel is the Founder and Editor of iVoteAmerica®.. He has been an Arizona resident since 1960. He is a commercial real estate broker, private pilot, photographer and an avid reader of America's history.

Marsha Blackburn should be thanked by the people of Tennessee. She is not your typical GOP Senator who views her primary role as towing the Party line. Make no mistake, she is a dedicated conservative Republican and staunch supporter of the GOP.

Case in point. When it comes to Supreme Court nominees, much of the GOP establishment operates on the principle, “The President should get his nominee.” No, in fact, rubber-stamping judges would be unconstitutional, and an abdication of the Senate’s duty to advise and consent.

President Biden broke federal law and decades of equal employment opportunity precedent by stating his Supreme Court nominee would be a black female. He didn’t suggest it was time to consider qualified minorities, male and female. He boldly went when no other President dared to go, straight to skin color and gender, never mentioning qualifications.

It was Sen. Blackburn who was one of the first to confront Biden’s defective hiring criteria for a new Justice to fill Justice Stephen Bryer’s seat. The attitude of many Republicans was, oh well, it’s Joe’s turn to pick someone he wants and his nominee should be treated with respect and confirmed.

To be sure, there are no posters of sick people posted in the hearing room, as was the case with Amy Coney Barrett’s hearing. During one of Amy Coney Barrett’s early hearings,  Senator Diane Feinstein told Barrett she might not be qualified because Catholics don’t support abortion, and “the dogma resides within you?” There will be no readings from Judge Ketanji Brown Jackson’s yearbooks, or FBI interrogation of her high school and college friends, as was true of Brent Kavanaugh. I won’t get into the hunt for scurrilous accusations of gang rape. 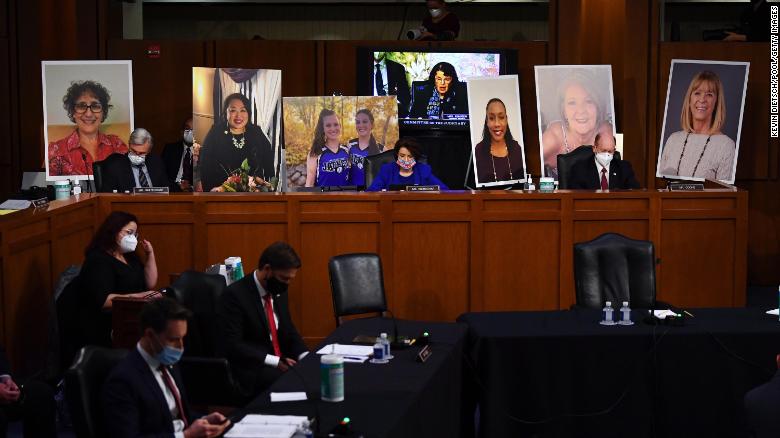 When Kavanaugh and Barrett were attacked and the hearing process hijacked, Democrats defended themselves, hiding behind the “advise and consent” clause of the US Constitution. They were doing what was right, for America, so they claimed. In contrast to the Kavanaugh circus, today’s Republicans are almost passive.

However, Marsha Blackburn is decidedly guilty of being a woman, while white. Guilty as charged. She understands that Biden wants consent for his nominee, but no advice. Here are some of Senator Blackbvrn’s remarks:

“The American people want to know about you, and how you are going to approach your job, what decisions you have made in the past, what you have written and said,” stated Blackburn. She goes on to ask the nominee if biological males competing with females in sports is appropriate. She mentioned parental rights in education, healthcare mandates that will harm children.

Finally, Blackburn confronted Judge Ketanji Brown Jackson about her support for criminals, Gitmo attendees, child pornography offenders, and more. And then, there was this:

SEN. BLACKBURN: "Can you provide a definition of the word 'woman'?"

JACKSON: "I'm not a biologist" pic.twitter.com/i7Rg83z5Y4

It was Marsha Blackburn who went through the writings of Judge Ketanji Brown Jackson and accused her of being what she truly is,  a left-wing progressive judge and advocate of the policies of the new socialist and Marxist Democratic party. Certainly, she is no textualist or an originalist. Activist judges like Brown Jackson make up the law as they go. Ignoring original intent, hell-bent on righting America’s wrongs, they live on modified precedent and social transformation impulses.

Senator Blackburn won’t have any of it.

In 2015, Judge Ketanji Brown Jackson issued statements in support of CRT and has been soft of crime, and pedophiles. This has put Senator Blackburn at odds with and under attack by the New York Times.

Blackburn’s refusal to go soft is constitutional. Her unwillingness to go-along-to-get-along is precisely why Tennessee elected her to the US Senate. It was today, March 22, 2022, that Marsha Blackburn told Foxnews that Judge Ketanji Brown Jackson is a progressive judge. In effect, a compromised candidate.

Blackburn is not posturing for re-election, she is fulfilling her constitutional obligations to vet the candidate for, and on behalf of, her constituents. That’s what advise and consent mean. She is acting in perfect congruity to her oath of office and the intent of the framers.

I anticipate Tennessee can expect a no-vote rejection by Senator Marsha Blackburn of Judge Ketanji Brown Jackson for the Supreme Court.

We are a part of the iVoteAmerica Network, bringing voters cutting-edge conservative analysis of the political trends.

We provide candidates and campaigns with a wide range of services, including:

Want to join us?

If you're happy with BIG Government, then ignore this!